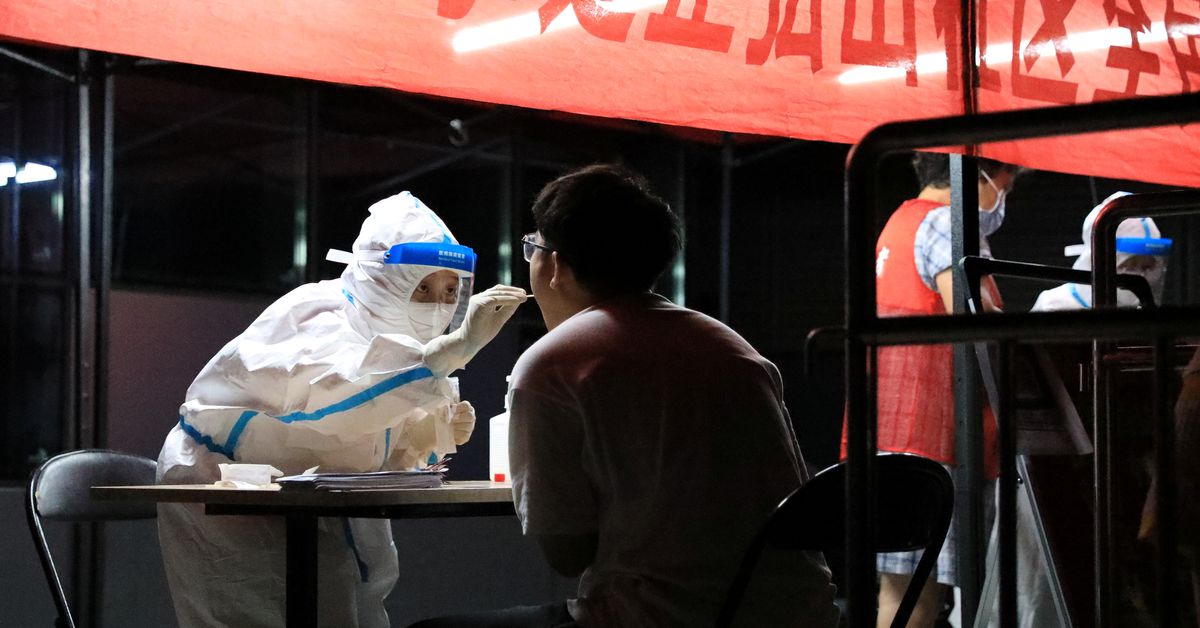 BEIJING, Aug 2 (Reuters) – The Delta variant poses new risks for the world’s second-biggest economy as it spreads from the coast to China’s inland cities and presents fresh challenges to authorities who have for months managed to avert any widespread outbreak of the coronavirus.

Barely a month after disrupting industry in the southern export hub of Guangdong, cases of the Delta variant were detected in Nanjing, capital of Jiangsu province on the coast. The infections were traced back to a flight from Russia.

Since Nanjing confirmed its first Delta cases on July 20, numerous cities in southern China and a few in the north including Beijing have reported infections. The tally of locally transmitted cases stood at 353 as of Sunday.

It was not immediately clear whether Nanjing was the source of all the infections, as some authorities have yet to disclose the outcome of their virus-tracing efforts.

The emergence of the variant, which is more transmissible than the original strain first detected in the city of Wuhan in late 2019, has seen the return of tough counter-epidemic measures.

Many cities have warned against non-essential travel, required proof of negative tests for those who do travel, and launched mass-testing for the virus.

Policymakers are under pressure to ensure that while populations are protected, economies are not excessively strained.

China’s overall economy is not invulnerable. It grew more slowly than expected in April-June, due to persistently high raw material prices, cautious consumer spending and a subdued real estate market.

“But given the country’s track record in dealing with the virus so far, our assumption is that they will quash the outbreak before it gets out of control. Of course, doing so will come at some economic cost.”

Yangzhou, near Nanjing, has been battling rising coronavirus cases since last Wednesday. Many factories and logistics firms in the city of 5 million have been shut as employees joined queues of people to get tested, some up to three times a week.

“We cannot deliver goods because the delivery firm informed us that they’ve suspended their services,” said a manager of a toy factory surnamed Wang.

“In the past few days, many places have been gradually locked down. We were officially told to stop operations today, and all our employees didn’t come to the factory.”

Tourism in some smaller cities could take a hit in August, usually a peak travel season due to the summer school break.

Zhangjiajie, where dramatic stone pillars inspired the Hallelujah Mountains in the 2009 blockbuster “Avatar”, has seen an outbreak, linked to Nanjing, traced to a theatrical performance at a tourist site on July 22.

Zhong Nanshan, a coronavirus expert who helped shape China’s COVID-19 response, told a conference on the weekend that he was not too worried about the ability of big cities, like Nanjing, to tackle the virus with their “excellent” control systems, state media reported.

But there were questions about the ability of smaller places, like Zhangjiajie, with limited resources when suddenly having to test and trace the 2,000 people in the audience for the show as well as their close contacts, he said.

Zhangjiajie, nestled in the mountains of Hunan province, has gone into a semi-lockdown, closed tourist sites and indoor entertainment venues, and told people to avoid unnecessary trips.

“All staff at our hotel must take nucleic acid tests every two days,” said a front desk attendant surnamed Li at the Zhangjiajie Huatian Hotel (000428.SZ).

The hotel is not open to the public and its online reservation system is suspended.

A staffer surnamed Yin at Zhangjiajie China International Travel Agency said everyone at her agency had been sent home for a “vacation”.

“We’re waiting for the notice on when we can start working again,” she said.

Is Japan open to vacationers? It is the place Singaporeans need to journey

Science And Technology News
We use cookies on our website to give you the most relevant experience by remembering your preferences and repeat visits. By clicking “Accept All”, you consent to the use of ALL the cookies. However, you may visit "Cookie Settings" to provide a controlled consent.
Cookie SettingsAccept All
Manage consent